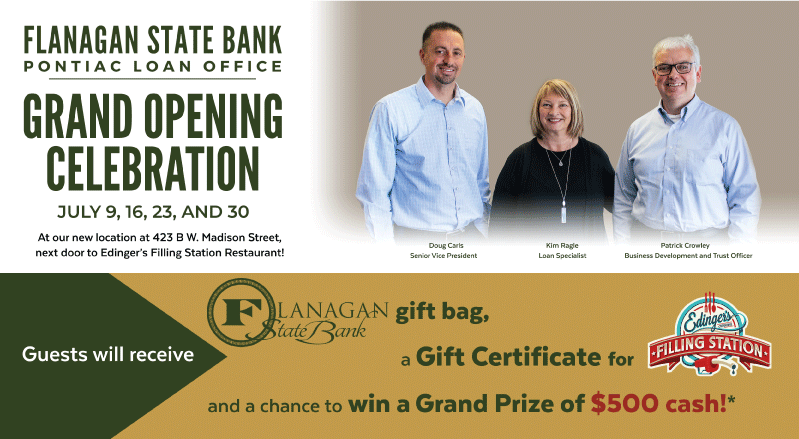 A PURCHASE OR ACCOUNT OPENING WILL NOT INCREASE CHANCES OF WINNING.

The Contest sponsor reserves the right to withdraw or terminate this Contest at any time, without notice.

1) TO ENTER: The Contest will run on location every Friday in July 2021 (July 9, 16,23, and 30 2021.  (“Promotion Period”). Sponsor reserves the right to extend or shorten the contest at their sole discretion. There is one (1) way to enter the contest during the promotion period:

Entrants may enter only by using the entry methods described in these rules. Entries that are mechanically reproduced, copied, illegible, incomplete or inaccurate are void. Entries become the property of Flanagan State Bank and will not be acknowledged or returned.

Entries must be received by the end of business on the last date of the Promotion Period. Contest is open to legal U.S. residents 18 years of age and older at the time of entry, who are not employees of Flanagan State Bank, its parent or subsidiaries, or members of their immediate family or household. Void where prohibited by law. The Contest is subject to all applicable federal, state and local laws, regulations and taxes. Only one (1) entry per household. By participating, entrant agrees to abide and be bound by the Official Contest Rules and to accept the decision of Flanagan State Bank as final in all respects.

3) PRIZE:  All participants will receive a Flanagan State Bank Gift bag, an Edinger’s Filling Station gift certificate which will vary in denomination between $5 and $25; drawn at random and given away during the events.  Participants will also be entered into a drawing for a $500 cash prize.  The Grand Prize winner will be drawn from qualified entries received during the Promotion Period Winner is responsible for all taxes on prizes and expenses, including, without limitation, federal, state and local sales, and income taxes, luxury taxes and any other costs incurred in claiming or using the prize. No prize substitutions or cash equivalent of prize is permitted.

4) WINNER SELECTION AND NOTIFICATION, AWARDING OF PRIZE: The Grand Prize winner will be selected by Sponsor by randomized selection from among all eligible entries received during the Promotion Period. Decisions of Sponsor are final. Winner will be notified by phone or e-mail  on or about August 9, 2021 at the phone number provided on the entry form. If a selected winner is ineligible, declines the prize, or if Sponsor is unable to make contact with a selected winner after reasonable effort and time, the prize shall be forfeited and will be awarded to an alternate winner selected by another randomized selection from all remaining eligible entries. The winner will must claim the prize via instructions provided by Sponsor. Sponsor will determine specific prize components in Sponsor’s sole discretion.

5) ODDS: Odds of being selected will depend on the total number of eligible entries received during the Promotion Period.

6) ADDITIONAL TERMS: By participating, entrants agree to (a) the Official Rules and the decision of the Sponsor, which shall be final in all respects; (b) release, discharge and hold harmless, Sponsor, its respective parents, subsidiaries, affiliates, officers, directors, and employees from any liability, claims, or damages arising out of their participation in the Contest, and the acceptance, use, misuse, or possession of any prize. By accepting a prize, the winner agrees to, where legal, the use of their name and/or likenesses for advertising and publicity purposes without additional compensation or consideration. SPONSOR AND ITS PARENTS, SUBSIDIARIES, AFFILIATES, ADVERTISING AND PROMOTIONAL AGENCIES, AND ALL THEIR RESPECTIVE OFFICERS, DIRECTORS, EMPLOYEES, REPRESENTATIVES AND AGENTS DISCLAIM ANY LIABILITY FOR DAMAGE TO ANY COMPUTER SYSTEM RESULTING FROM ACCESS TO OR THE DOWNLOAD OF INFORMATION OR MATERIALS CONNECTED WITH THE SWEEPSTAKES.

7) LIMITATION OF LIABILITY: Sponsor, is not responsible for the printing of or typographical errors in any Contest‐related materials; for stolen, lost, late, misdirected, damaged, incomplete, illegible, or postage‐due mail or entries; or for transactions that are processed late or incorrectly or are lost due to computer or electronic malfunction.

8) CANCELLATION: If for any reason beyond the control of Sponsor the Contest is unable to be held, or for any cause affecting the Sweepstake’s operability, fairness, integrity, or accuracy, Sponsor reserves the right to modify, suspend, or cancel the Contest without notice.

10) FACEBOOK AND TWITTER: The Contest is not sponsored, endorsed, administered by, or associated with Facebook.com, Twitter.com or any of their respective subsidiaries or affiliates. Facebook and Twitter is not responsible or liable for the Contest. Participants in the Contest, by their participation, agree to release and hold harmless Facebook.com and Twitter.com, and their subsidiaries or affiliates from any and all claims based on the Contest described herein. Any questions, comments, or complaints regarding the Contest should be directed to the Sponsor, not Facebook or Twitter.

From time to time, we provide links to other websites for the use of our visitors, which have been compiled from internal and external sources. By clicking “Continue” below, you will be opening a new browser window and leaving our website. Although we have reviewed the website prior to creating the link, we are not responsible for the content of the sites.

Information on linked website pages may become dated or change without notice, and we do not represent or warrant that information contained on these linked pages are complete or accurate. We suggest that you always verify information obtained from linked websites before you act upon such information.

The privacy policy of this bank does not apply to the website you visit. We suggest that you always verify information obtained from linked websites before you act upon such information.